spring on the Big Sur coast

For the past ten years, I have enjoyed 4 straight days of painting on the Big Sur Coast. During these four days, I paint like a fiend as there are no other responsibilities. I have been accompanied by some combination of nine friends, as we share meals, art books, and favorite sites. Staying overnight a short distance from the plunging cliffs and turquoise waters means I can rise early or stay out late to catch the early morning or afternoon light at these times. With other painters along, we inspire each other to try new scenes, and keep painting. Often the fog can be a cold deterrent to paint for the entire day, but with enough jackets and the smiles of friends, endurance is not an issue. Following is a summary of the days’ adventures.

DAY 1: Asilomar Beach: here is a great place to study the waves and rocks. Often wildflowers are present on the dunes in the spring. The dune sand is very pale and contrasts with the deep dark colors of the ocean waves. Large rocks offshore create huge splashes as the waves roll over them. This beach was our first stop. Although the fog had a cool blanket over the coast, Jean and I were able to find some shelter near the dunes and were able to watch and paint the waves.

After settling into our lodging, we ventured out again. This time we chose Point Lobos and Whaler’s Cove for its sheltered location. The wild yarrow was climbing the bank near the parking and the wind was blowing patterns on the cove.

On the first evening we all brought food to share. We settle in for an evening of food, wine, and friendship. We each bring our favorite art books to pass around and from which we get inspired. My favorite to bring is Franz A. Bischoff, the Life and Art of an American Master by Jean Stern of the Irvine Museum. Bischoff painted along the Carmel coast and many of his paintings are illustrated in the book.

Word spread that the sun was shining south of Big Sur village. Jean and I headed down the coast but stopped at Garrapata State Beach. We were both impressed by the number and variety of wildflowers. The red Indian paintbrushes were in abundance, like I had never observed on previous visits. We decided to make this our first painting spot despite the fog. The wind was gentle at this early hour.

Once we finished our first painting, we moved on down the coast. Sure enough, the sun was shining south of the village. We found a pull-off overlooking the sequence of disappearing headlands just North of Julia Pfeiffer Burns Sate Park. Some of our friend were leaving as we arrived. The sun was warm and I was able to shed my two fleece jackets and windbreaker, grateful that a t-shirt was plenty of warmth.

The pull-out was small, so it did not have space for many cars. We thought we would be somewhat protected from the massive tourist onslaught that happens when we set up our easels. Actually we were approached by many respectful visitors speaking languages from around the world: Japanese, Chinese, French, Spanish, German and of course English speakers from the States. The Big Sur Coast is an ambassador for people visiting from around the world. People love to gaze into the great beyond.

Since it was only about 3:30 when we finished at the overlook, we decided to drive further South. We were meeting everyone for dinner at the River Inn at 6:30 and there was still time for one more painting. There was road and Park work at Julia Pfeiffer Burns, but just before the traffic control people, we were able to pull to the side. When we reconnoitered the area, we discovered that we were just above the old homestead. The views visible to the North were of turquoise water in the foreground and the great mountainous headlands in the distance. A perfect setting for the last painting of the day.

After a great day of creative exertion, we were interested in having a more restful day. We decided to return to Garrapata for a morning painting. The coastline with its numerous rocky formations and the presence of colorful wildflowers lured us back. After a few hours, the wind blowing my easel wore me out and we returned to our lodging for lunch and rest.

Painting the fountain and flowers in the courtyard was restful, as the walls provided protection from the wind and the sun came out to warm us.  We planned an early dinner at the new Sur restaurant in the Barnyard. A fitting name for our last dinner together.

Some of us wanted to paint a nocturne (night painting) just after sunset. I need time in the light to mix up colors on my palette, and enough light to have a distinction between trees, beach, ocean, and sky. Scenic Drive in Carmel is lined with houses, and I thought we would have some lights from houses perhaps reflected on the sand or water. After we set up, at about 7 :30, there was enough distinction between the important elements. As the eve darkened, only one home had lights glowing. It seemed that all the others were dark. All at once, several medical vehicles and a fire truck arrived nearby, lights flashing and sirens blaring. We did get lights but not the kind I wanted. We never learned what had happened…some sort of medical emergency at the nearby home?

I had not planned to paint today, just pack up and leave. But when we woke, the sun was rising and shining under the fog, which was just off shore. It lit up the trees and parts of the meadow in the field nearby. After a quick breakfast, I hurried out, set up, and painted a quick little study of the light on the trees and hillside. As I made my last strokes, the fog rolled back in, blocking out the light and obscuring the landscape.

It is always hard to leave this place of inspiration and peace. I did feel satisfied, full of the visual beauty, renewed friendships, and new paintings to bring home. 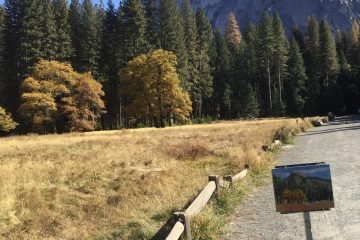 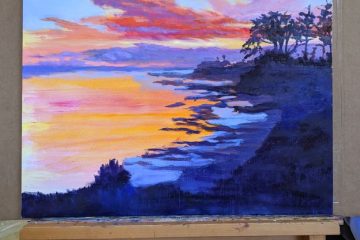 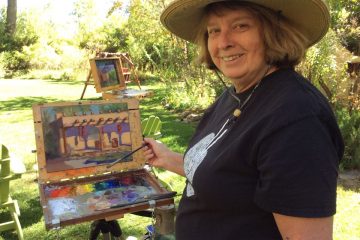 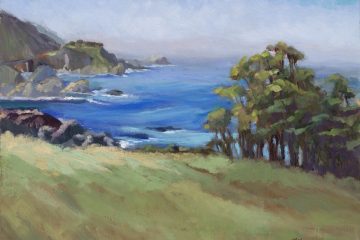 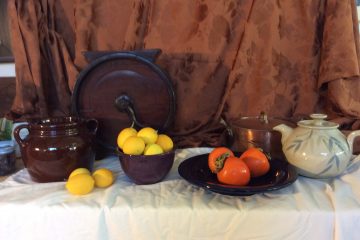 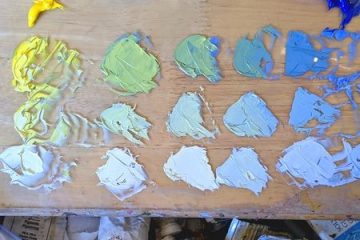 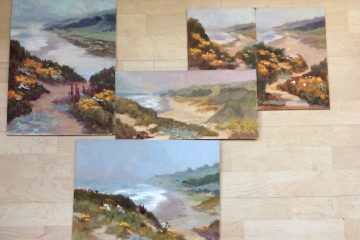 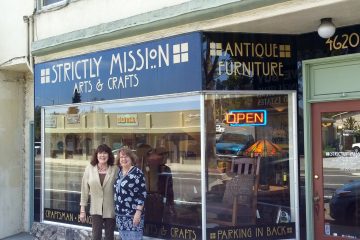